Last night I finished building my Proline Pro-MT 2WD 1/10th scale monster truck. I wanted to do a build video series, or at least have a series of pictures. However, I was too excited to get it built and I don't have the best video equipment available. 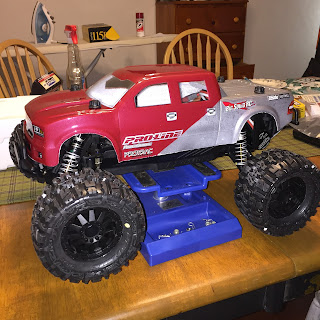 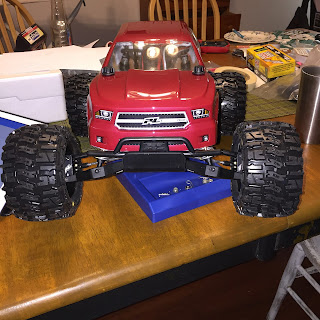 Thus I only have finished pictures, I don't even have a picture of the body before I painted it.

I am pleased with the result of my first kit build in over 12 years. Most Radio Control vehicles now a days are Ready to Run, or RTR.  this means they're already built, and at most you have to provide a battery. The Proline Pro2 and Pro-MT kits require building, but they are considered "partially assembled" because the shocks, transmission and steering rack are built and in the latter two cases installed on the chassis.

Having those fiddly bits already built is a very nice feature, especially as the build quality from Proline is top notch.

That doesn't mean there are no gotchas or things to look out for in the kit. I have always had trouble with turnbuckles, and I still do. I can never get the two sides exactly equal, they're always off by at least a few 10th of a millimeter. Maybe it doesn't matter, but i always feel like I'm letting the engineers down if I don't get it 100% correct.

Proline has adopted a no e-clip design philosophy that I whole-heartedly support. E-clips are evil and tend to fly off randomly. Granted the nuts used in place must weigh several times more than an individual e-clip, but the ease of assembly and maintenance make it worth while.

Let me layout the equipment I used:

I did add a full set of Proline Pre-mounted Primes, because I live next to a parking lot that is empty 90% of the time.

Here's a link to a Running Video at YouTube of the stock truck with the stock Trencher tires at an off-road track not too far from me. The track is very dusty, and not well maintained, but the Trenchers hooked up almost too well, doing wheelies if I punched the throttle too hard.

Here's a running video in the 'fore mentioned parking lot. Also a lot of grip for nearly slick Primes, more wheelies and some traction rolls. It is a fun setup, and I think the tires will lose some of their grip as they get used, so we should be able to slide it around a bit more.

All in all, this is a great kit, with terrific production values. The only caveat I would note is at least here in eastern PA, there isn't great support for parts in local shops. But the same can be said of anything not from Traxxas or Axial, there's not much HPI support or even Team Associated or Losi parts on walls, also it seems locally the crawler is king... which I don't find interesting at all.


Its not my first time to visit this web page, i am browsing this web site dailly and get good information from here daily. craigslist ohio